I have worked on a few different programming languages over the last few years. Using PCs in my work has increased my knowledge of Access and VBA (Visual Basic for Applications). I developed quite a few projects at my previous workplace, Discount Window Systems (now closed), including complex wages databases, sales and fitting reports, among other things.

In work we used a program called Caliburn, by Merlin Software, to 'cost' the double glazed window orders. It was essentially a bespoke Paradox database server which enabled access to a centralized database for multiple users on a per-turn basis. It was an extremely expensive program (Ł3000 a year maintenance contract, plus Ł1000 per user licence). It was also very buggy, and we often lost an hour's work when the program crashed. We spent quite a lot of money checking our network to make sure it was not the cause of the problems (at their suggestion), only to finally discover it was Caliburn itself that was causing the problem! That was extremely frustrating for us.

This why I named my program 'Cali-bug', to commemorate all the difficulties we had with it. 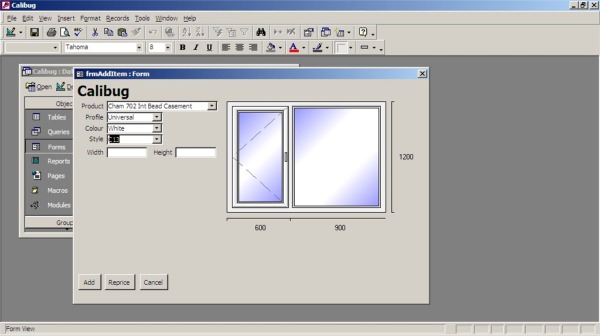 This is a small program in Access I started to develop at home for the purpose of costing contracts for double glazing firms. I only managed to start it. Unfortunately I didn't have time to develop it in work, as I had too many other things to do, and this project was not given any priority by the managers even though they knew about it. It is a great pity because it could have saved them a lot of money at the time.

The program is quite unique in that it allows any number of window designs to be created, simply by adding a few rows of numbers in a couple of tables. This program could have been developed to be installed on sales representatives' laptops, showing the customer exactly what they want, as well as showing the sales representative what he would be earning from the sale. The orders could have been emailed directly to the main company database for processing without the effort of having to enter them on the computer manually.

Another reason I decided to develop such a program was to aid in the ordering of glazing units. These need to be ordered to the exact millimetre for the PVC frames, and the only program we knew that could calculate them was Caliburn, which is an awful program. This version of Calibug is capable of doing this, which means a glass unit order could be printed off directly from the program.

The window graphic is drawn programmatically from the dimensions supplied by the database. The window graphic was created as an ActiveX COM in Delphi. If I was designing this today, I would probably make it in Python with a MySQL database behind it.

Well that is all ancient history now. But I enjoy running my Calibug program to remind me of the days when I worked in Discount Window Systems!