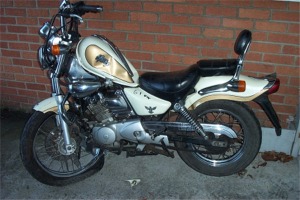 On the 6th of January, I was involved in a very serious traffic accident. I had slept late that morning, and it was a bit of a rush to get ready in time to head out for work, but once I was on the bike, I was alright. As I travelled on my motorbike down the Sydenham Bypass past Holywood, I indicated left to enter the slip road heading for the estate. Traffic was very heavy, as it was morning rush hour, and the lanes to my right were congested and moving very slowly. The road I was travelling on was clear, so I headed on towards the flyover around 45 mph. I was just around five minutes away from where I work.

As I slowed down to enter the flyover, I saw a car suddenly appear out the line of traffic heading across my lane into Maryfield to my left, just a few seconds in front of me. I knew straight away that I was going to hit it. I didn't even have time to pull on the brakes, when I hit the side of the car at around 30-40 mph. I remember hearing a crunching sound, and then seeing the sky spinning round for a few seconds. Next thing I was getting up from the road with great pain inside me (I have no recollection of actually hitting the road, or leaving the motorcycle).

Several witnesses rushed over to see if I was alright, as did the man I had collided with. Thankfully after the pain inside went, I was able to stand up and walk to the side of the road. I explained my elbow was sore and near my groin area was very sore. Someone must have called an ambulance and police, as after a few minutes they arrived on the scene. I managed to walk into the ambulance and was taken up to the Ulster Hospital, Dundonald.

When I arrived at the hospital, I was wheeled in a wheel chair into A+E, where I was checked out for any injuries I had received, which turned out to be a fractured left elbow, and a few cuts and bruises. Then I was wheeled up to the X-Ray room, where I waited for 10 or so minutes.

While waiting for X-Rays, I started to feel very faint, and shouted out "I'm going to faint!". The staff managed to find a trolley for me, and I was wheeled down a very small room, where, for about half an hour, they used Ultra-sound to scan for internal injuries or bleeding. It's hard to describe at this point the thoughts that were going through my head. I thought to myself, what if I am bleeding inside, and they can't stop it? Is that maybe why I am so faint? What if this should be my last day, and, is this the way it ends? And I was very afraid of death, even though I am a Christian, and believe I will be in heaven when I die. Only someone who has had that experience knows what it is like.

Thankfully they found no internal damage, and no bleeding, but they kept me in hospital another day, as my heart rate was around 120, and refused to drop. My elbow has healed well, and I am back at work. As you can see from the picture, the motorbike didn't come out so favourably. It's a complete write-off.

I was five minutes from work, yet I might as well have been just one minute from eternity. But I believe the Lord preserved me through this time of difficulty. I can say with David in Psalm 30:2-3, "O LORD my God, I cried unto thee, and thou hast healed me. O LORD, thou hast brought up my soul from the grave: thou hast kept me alive, that I should not go down to the pit" .If the worst had happened, of which I was very afraid, I know I would be in heaven with the Lord Jesus Christ. 2 Cor 5:8 states, "We are confident, I say, and willing rather to be absent from the body, and to be present with the Lord".  The Bible says "Boast not thyself of tomorrow, for thou knowest not what a day may bring forth", Prov 27:1. Do you have peace, knowing that if you die, and no-one knows when that day is, that when you meet your Creator, that you will be accepted entrance to heaven? Or do you fear both death and the judgement (Hebrews 9:27) of a Righteous God? Again, Jesus said, "No man comes to the Father, but by Me", John 14:6. Jesus Christ died for you. He took the punishment your sins deserve, and satisfied God (Isaiah 53). All you have to do is accept that what Christ has done was in your place, and ask Him to save you. Jesus said, "Him that cometh to Me, I will in no wise cast out", John 6:37.